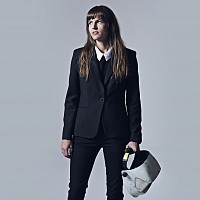 Sculpture, for me, is a space to explore the feeling of one’s body in relation to an object. Functional objects quite obviously explore this relationship. What is functional or non-functional is debatable especially in this strange-expanding-spacescape of life. I believe there should always be room for the obvious and non-obvious in all things.

I am always looking. I read mathematical, philosophical, scientific and medical books that go over my head. Seeking the big, grand, rushing feeling of grasping-and-not-grasping. Pushing always into the unknown. Whatever I am looking for, a fascination with density and looseness is the lens through which I see the world. It’s about how I physically and mentally feel on this earth: things are intense and then blunt, real and then unreal, meaningful and then meaningless. I am in this dynamic tension with my materials too. There is a give and take, a push and pull, an expansion and contraction – a density and looseness to working with steel. It takes a lot as it is a very demanding material: it’s heavy; it’s hot; it’s hard; it behaves unpredictably; it exhausts me. But it gives me so much back, in its permanence and reliability.

‘One of the leading contemporary South African sculptors of her generation, Beth Diane Armstrong captures a mastery of the steel medium.  Centered on contrasting variations of density and looseness Armstrong’s use of sculpture explores the different expressions of these two terms in relation to scale, structure, materiality, space, representation and process.

Armstrong negotiates an unremitting pull between the desire to be entirely overwhelmed and subsumed by a sculpture and the drive to resolve and contain the idiosyncratic challenges posed by it. A central ambition which continues to inform Armstrong’s process is the translation of fleeting, abstract experiences into the permanence of a physically demanding material such as steel.

Beginning as thought experiments, the works evolve according to a set of parameters which the artist prescribes. Armstrong develops these parameters on the level of underlying structures (calculations, measurements) and through the higher level realizations of the works as sculptural structures, maintaining a synchronous relationship to both aspects. These meticulous processes, her attention to detail and her astounding ability to effortlessly switch between intricate smaller works and imposing large-scale masses of steel reaffirms Armstrong ambitions to grapple with and understand the ways in which bodies experience space and translate this experience into structures, both perceptual and physical’.

Currently living and working in Johannesburg Beth Diane was born in South African in 1985. In 2010, she completed, with distinction, her Masters of Fine Art at Rhodes University. Rhodes bought her BFA exhibition, Hibernation, for their permanent collection. Armstrong has partaken in several solo exhibitions, a number of group shows and projects locally and internationally, as well as being included is various private and public collections. Some recent highlighted commissions include the completion of a large permanent public artwork Flag in Oostvoorne, in the Netherlands, commissioned by the Kern Kunst Westvoorne Foundation and her most recent Page for National English Literary Museum, a 10-ton outdoor sculpture, in Grahamstown, South Africa. Armstrong was awarded the prestigious Standard Bank Young Artist Award 2017- Visual Arts in South Africa for 2017.

2007
Hibernation, Gallery in the Round, Grahamstown, South Africa