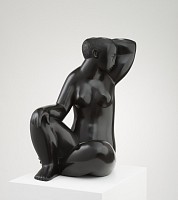 Florian Wozniak spent his childhood in Germany and India before moving to South Africa. He graduated with a Bachelors degree in Fine Art, majoring in sculpture from the University of the Witwatersrand in Johannesburg. Wozniak continued his studies in Europe studying lithography at the Internationale Sommerakademie in Salzburg and carving marble at the Studio Carlo Nicoli in Carrara.

During his time in Europe he was employed as a sculptor and stonemason in Winterthur, Switzerland. In the early 1990’s, he earned practical experience while he furthered his studies in stone carving and other sculpture techniques such as bronze casting at the Bildhauerschule Mullheim, Switzerland. During this time, he was employed as a technical assistant and tutor, supervising and mentoring the students' artistic development.

For almost three decades Wozniak has worked independently as a contemporary artist in South Africa. Working primarily in bronze, the artist's smooth, figurative forms feel rooted to the earth and convey a powerful serenity. His sculptures are by turns tender and endearing, playful and witty; his characters often evoking pathos or humour.

Wozniak has participated in numerous solo and group exhibitions at Everard Read locally and abroad. His sculptures form part of many local and international public and private collections.