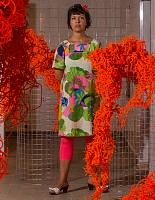 In her artistic practice, Liza Grobler is concerned with the creative process, the tangible qualities of material, and the physical viewer/artwork relationship. The objects, images and installations are constructed through collaboration, interaction and exchange. Gallery exhibitions, projects and interventions are integrated components that cross-reference one another. Her collaboration with Qubeka Bead Studio spans more than a decade. Together, they have produced over 50 artworks which have been exhibited widely, including Iziko Museum (Cape Town, 2006), the Florence Biennial (Italy, 2006), Johannesburg Art Gallery (Johannesburg, 2014) and the 1:54 Art Fair (London, 2015).

2003
I can’t see the wood for the trees, so I’m taking a line for a very long walk, João Ferreira Gallery, Cape Town, South Africa

2018
A place in the Sun; African Leaders Conference, Stellenbosch

2012
From Mooi uitsig to Mooiuitsig: an Artventure, commissioned by Lien Botha for Hangklip Art Week

2012
The Names We Give – conference, Gordon Institute for the Performing and Creative Arts, Cape Town

2014
'Blindfolded Line, Dancing Through Time', a limited edition book on the work of Liza Grobler with contributions by Amanda Botha, Andrew Lamprecht and Jeanetta Blignaut