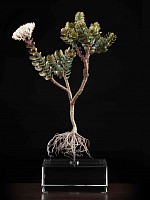 Nic Bladen has become known for his extraordinary botanical sculptures which celebrate the subtle and diverse beauty of the plants that grace his native Western Cape, South Africa. Bladen has pioneered a way of developing perfect castings of organic matter to preserve or fossilize plants and flowers. Using the ancient lost wax method, Bladen makes molds from organic material, and then transforms these into unique sculptures of entire plants.

Bladen's first solo exhibition, Peninsula, at Everard Read Gallery Cape Town in 2013, focused on the richness of botanical diversity that surrounds the artist's Simons Town studio, which is situated within the heart of the Cape Floral Kingdom, the smallest yet richest of the world's six floral kingdoms. For this show, concessions from landowners on the peninsula enabled Bladen to harvest several rare species.

In 2015, Bladen worked as Artist in Residence at Tswalu Kalahari, a private nature reserve in South Africa's Northern Cape Province. The sculptures that he created during this time - a depiction of iconic, beautiful and strange Kalahari Desert plants and trees - formed his second solo exhibition: Kalahari: a season at Tswalu, at Everard Read Johannesburg in October 2015.

A 2017 collection of work was shown at Everard Read Johannesburg depicting the tenacity of Cape plants to flower, despite the harsh conditions endured during the current drought. In 2018, he had his first solo exhibition at Everard Read in London.

Bladen's unique works can be found in the Standard Bank, Ellerman House and Oppenheimer collections in South Africa, as well as in many other private collections around the world.